February 06, 2014
Women were not allowed to bear witness in early Jewish society. The Rabbis consider that the women can not bear witness due to the nine curses inflicted upon all women as Eve was blamed for the fall of Adam from heaven. Women in today's Israel are not allowed to give evidence in Rabbinical courts. The Rabbis justify why women cannot bear witness by citing Genesis;18:9-16, where it is stated that Sara, the wife of Prophet Abraham (peace be upon him) had lied: “The LORD said to Abraham, "Why did Sarah laugh, and say, ‘Shall I indeed bear a child, now that I am old?’ Is anything too hard for the LORD? At the appointed time I will return to you, in the spring, and Sarah shall have a son. But Sarah denied, saying, "I did not laugh"; for she was afraid. He said, "No, but you did laugh.”(Genesis;18:13-15). The Rabbis use this incident as evidence that women are unqualified to bear witness. It should be noted here that this story narrated in Genesis 18:9-16 has been mentioned more than once in the Qur’an at 11:69-74 & 51:24-30 without hint of any lies by Sara :“His wife (Sarah), who was standing there, laughed when We gave her good news of Allah's giving her a son Isaac and after him a grandson Jacob. She said: "O wonder! (An expression to indicate surprise) Shall I bear a child now when I have become an old woman and my husband has become well advanced in age? This is indeed a strange thing!" They (angels, messengers of God) said: "Do you wonder at Allah's decree? May Allah's mercy and His blessings be upon you, O’ residents of the household; for He is indeed worthy of all praise, full of all glory.” (Qur’an;11:71-73).

In the Christian West, both ecclesiastical and civil law debarred women from giving testimony until late last century. If a man accuses his wife of unchastity, her testimony will not be considered at all according to the Bible. The accused wife has to be subjected to a trial by ordeal. In this trial, the wife faces a complex and humiliating ritual which was supposed to prove her guilt or innocence (Numbers;5:11-31). If she is found guilty after this ordeal, she will be humiliated and punished: “And when he has made her drink the water, then, if she has defiled herself and has acted unfaithfully against her husband, the water that brings the curse shall enter into her and cause bitter pain, and her body shall swell, and her thigh shall fall away, and the woman shall become an execration among her people. (Numbers;5:27). If she is found not guilty, her husband will be innocent of any wrongdoing; “The man shall be free from iniquity, but the woman shall bear her iniquity.”(Numbers;5:31). Besides, (according to Bible, Deuteronomy;22:13-21), if a man takes a woman as a wife and then accuses her of not being a virgin, her own testimony will not count. Her parents had to bring evidence of her virginity before the elders of the town. If the parents could not prove the innocence of their daughter, she would be stoned to death on her father's doorsteps. If the parents were able to prove her innocence, the husband would only be fined one hundred shekels of silver and he could not divorce his wife as long as he lived. In Islam the testimony of a woman is accepted as equal to that of a man. In fact the woman's testimony can even invalidate the man's. If a man accuses his wife of unchastity, he is required to solemnly swear five times as evidence of the wife's guilt. If the wife denies and swears similarly five times, she isn't considered guilty and in either case the marriage is dissolved, details are given in Qur’an (24:6-11) and exegesis. However in case of financial transactions two male witnesses or one male and two females are required so that if one of them errs the other can remind her; “Let two witnesses from among you bear witness to all such documents (financial transactions), if two men cannot be found, then one man and two women of your choice should bear witness, so that if one of the women forgets anything the other may remind her.. (Qur’an;2:282). It does imply that, as a rule, women are less familiar with business and financial procedures than men and, therefore, more liable to commit mistakes in this respect, because in Islamic society the women is not required to work, the man is responsible to support the family, however there is no restriction on a women if she desires to work by her free will. 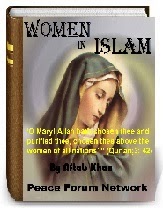 November 03, 2019
The women in the western culture have always been oppressed. The women had to launch the movements, to get the rights. There are diverse social movement, largely based in the U.S. , seeking equal rights and opportunities for women in their economic activities, personal lives, and politics. Though one can not agree with the all the aspects of the Nazi philosophy, but the one good aspect was that, it advocated the role of women to domestic duties and motherhood. Adolf Hitler set up Organization in 1933, named as Hitler-Jugend  (Hitler Youth); for educating and training male youths aged 13–18 in Nazi principles. A parallel organization, the ‘League of German Girls’, trained girls for domestic duties and motherhood. Though women were not totally segregated but this philosophy did not have any negative effect on the economy, rather positively contributed in the social sector. The famous saying. “give me good mothers, I shall give you strong nation ” stands validated again.  House
Read more