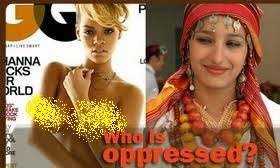 The women in the western culture have always been oppressed. The women had to launch the movements, to get the rights. There are diverse social movement, largely based in the , seeking equal rights and opportunities for women in their economic activities, personal lives, and politics. Though one can not agree with the all the aspects of the Nazi philosophy, but the one good aspect was that, it advocated the role of women to domestic duties and motherhood. Adolf Hitler set up Organization in 1933, named as Hitler-Jugend (Hitler Youth); for educating and training male youths aged 13–18 in Nazi principles. A parallel organization, the ‘League of German Girls’, trained girls for domestic duties and motherhood. Though women were not totally segregated but this philosophy did not have any negative effect on the economy, rather positively contributed in the social sector. The famous saying. “give me good mothers, I shall give you strong nation ” stands validated again.

Household is a full time job, taking care of children is great responsibility, if neglected the children will become a threat to society. While first-wave feminism of the 19th and early 20th centuries focused on women's legal rights, such as the right to vote, the second-wave feminism of the “women's movement” peaked in the 1960s and '70s and touched on every area of women's experience—including family, sexuality, and work. A variety of women's groups, including the National Organization for Women, sought to overturn laws that enforced discrimination in matters such as contract and property rights and employment and pay. The movement also sought to broaden women's self-awareness and challenge traditional stereotypes of women as passive, dependent, or irrational. An effort in the 1970s to pass the Equal Rights Amendment failed, but its aims had been largely achieved by other means by the end of the 20th century.

Islam had granted the rights to women 1400 years ago. The so called freedom of women resulting to their degradation as show piece for entertainment and commercialization can not be called freedom in the moral sense. The induction of women in the armed forces in the combat units by and some Western countries on the pretext of equality has not been a good experience, as many women were reported of sexual harassment and abuse.
~~~~~~~~~~~~~~~~~~~~~~~~~~~~~~~